Bringing About the Apocalypse – or – Google’s Plan to Make Zombies

I’m convinced. Google is going to bring about the zombie apocalypse. 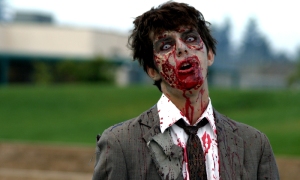 Either that or they’re trying to make the geek inherit the Earth.

If you haven’t been paying attention, Google has released several press releases talking about Google Glass. While they didn’t take my suggestion for their slogan (It’s a Computer…for Your Face!), Glass is something we can all get excited about.

Google Glass is a technological apparatus you wear on your face like, well, glasses. It’s like Blu-tooth with the smartphone integrated into the system. A forward facing camera allows you to interact with the icons.

The thing I find thrilling about this is that it basically gives you a heads-up display (HUD). For those of you familiar with gaming, first person shooters especially, you’ll know what I’m talking about. For those of you who aren’t, the HUD is stuff that appears on the screen while you’re running around your virtual world, like a map identifying threats, your health indicator, and other various things you should be aware of, depending on the environment.

If you’ve seen Prometheus, they had this sort of interactive smart tech built into their helmets.

That sounds really cool, right? Gamers adapt to that within the virtual world, so, perhaps, that means people will be able to adapt in the real world and won’t be stuck running into a wall and not being able to turn around.

Hold the phone. If I’m so excited about that, what makes me think Google is trying to kill us all?

Not kill us, no. Cull us. You may have missed this article, too.

That’s right. Google Maps is now mapping interiors. You will be able to navigate inside buildings. This would definitely be integrated into the Google Glass display. It’d be like exploring a cave in Skyrim, except you don’t go in blind. It’s all laid out for you.

Partnered with this, I’m afraid Google is setting us up for an endgame. The early-adapters, the gamers, the nerds…they’ll have the upper hand. And, we know how this ends. The ones who are most prepared for the zombies are the ones that created them.

It’s the end of the world. You have your Google Glass, a 9mm, 50 rounds of ammunition, 3 health kits, standard shoes, shirt, jeans. Your objective?

And, you’re playing on hardcore mode.

Don’t forget to upgrade your weapons.