The Greatest Thing About the 90s

I feel I must pay tribute to one of the greatest decades of all time. Despite attending high school and college in the 00’s (how do we say that, by the way? The double oh’s?) I feel like most of my generations fondest memories come from the pre-2000s. A lot of college was spent reminiscing about the good ol’ days, when Stephanie proclaimed “How rude!”

Ah, yes. Girl Power, a prince born in West Philadelphia, and TGIF was the best lineup on television. We didn’t have playlists, we had mix tapes. 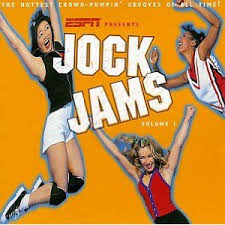 But, if I had to pick the one thing that has stuck with me from the 90s is the Jock Rock/ Jock Jams compliations.

A wonderment of audio fantasy. Sure, not all of the songs were from the 90s, but the idea was.

I recently went to a Rangers/Tigers playoff game. They played the beat from “We Will Rock You” at least five times.

Dare I ask: Where are the stadium anthems of today?

Where is the new Final Countdown? Who hasn’t yelled “Aye, oh, let’s go!” and mumbled through the rest of Blitzkrieg Bop while passing beer and peanuts down to that guy in the middle of the row?

In the world of Jock Jams, the 90s are never over.

And, there’s no better way to get pumped up.

← They’re Everywhere (who is ‘they’, again?)
The Mark Twain Media Engine →