Do you ever feel like someone is watching you?

Anyway, thanks to Cory Doctorow, I’ve spent the last two days in a state of look-over-the-shoulder paranoia.

In the best possible way.

It seems that quite a bit of dystopian sci-fi these days aren’t really plausible or even possible. In Little Brother, Doctorow builds a world that’s real enough to cause paranoia before you turn the lights out at night.

Cory Doctorow takes us inside a world of high school hackers. After a terrorist attack, San Francisco is under martial law. Everyone is monitored, everyone is watched, the Department of Homeland Security is off its leash.

Marcus Yallow uses all the technology at his disposal to mess with the government. When Big Brother is watching, who watches back? Little Brother. A wonderful, appropriate homage to George Orwell’s 1984.

While the political message is there, Doctorow tries to focus on the technological side of Yallow’s revolution, sometimes in long, meandering passages of techno-speak.

Some chapters got off point a time or two, and a few moments seemed out of character.

Little Brother is solid, disturbing, and deep. Not a light read, by any means, in the best possible way.

Libraries. You can’t live without them.

No, seriously. The success of cultures and societies can be directly linked to the flow of information. What made Rome so awesome? Roads.

You know, and maybe some other stuff, but it was mostly the roads.

I’ve been hunting the shelves for the past couple months. I’m actually very impressed by my local library’s YA collection. A whole room dedicated to the genre.

I picked up this little number on one of my expeditions. Without further ado, I give you:

I started this book, got to a chapter break, went online and started following Leah Cypess immediately.

For centuries, the kings of Samorna have depended upon the immortal Shifter for protection. When the Crown Prince Rokan ventures into the Mistwood to find the Shifter, she allows herself to be caught and brought back to the castle to begin her servitude. She becomes known as Lady Isabel at court to hide her true identity as the prince’s all powerful bodyguard.

The Shifter cannot remember anything of her previous dealings at court. Her memories begin to return, and her allegiance is torn.

This isn’t a werewolf thing, let me be clear on that. The Shifter can shift into anything, or part of anything. Say the hall’s too dark: she can shift just her eyes to a cat’s. This breaks away from the werewolf/shapeshifter idea from the beginning.

For some reason, I love incredibly powerful characters that are suddenly made helpless or ineffective against the dangers they must face.

Or, maybe I’m a sucker for memory loss. The reason for the memory loss is heartbreaking.

Either way, this book was a great fantasy piece in a well-developed world. I wish there were more.

In the first ten pages, you are thrust into a broken mind. You are stalked and hunted , injured, and trapped.

None of this is confusing. A great accomplishment, considering you enter without any information.

While some stories have a difficult time building empathy by starting with an action scene, this was brilliant. Confusion, terror, submission.

You should check it out.

I’m not afraid to admit it.

I’m a sucker for vampires (haha, bad pun), but seriously…

Here’s a vampire book I picked up at the library, so, just a day after you thought I dropped out of the blogosphere forever, I bring you:

(I vant to suck your blood) 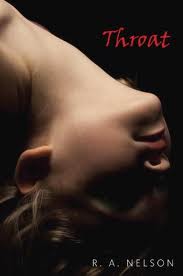 Not going to lie, (LaVar Burton would be disappointed) I chose this book because of its cover. I mean, look at that. I am a fan of raw and that looks RAW. Exposed. Vulnerable.

And, then there’s the title, when matched with the cover, makes you a little queasy. Like you’re getting punched in the stomach.

The thing is: the significance of the throat comes up in the narrative. And, it’s awesome. Also, creepy.

R.A. Nelson spins the story of Emma. She’s 17 years old and is attacked by a vampire one evening. However, during the attack, she has a Grand Mal seizure, disrupting her attacker. While she has some sensitivity to sunlight, she gains all the strengths and none of the weaknesses.

In order to save her family, Emma runs away from home and takes up residence in an abandoned section of a NASA base and prepares to confront her attacker in order to return home without fear of him finding her and killing her family.

The book is lyrical, and smooth from start to finish. The romance is honest. While Emma starts out a bit unsympathetic, the reader quickly settles into the character’s mindset and discovers why she is what she is.

While Nelson brought in some great worldbuilding, there were new concepts being introduced late in the game that were unimportant to the story (unless there are plans on sequel, series, etc.). Whether red herring or makings of a series, some of the details were distracting in their lack of significance to the plot. You can usually weed out what can be ignored.

The first ten pages of Throat were like reading a poem. There was something in the rhythm, the imagery, and the vocabulary that swept me along to a point where I didn’t realize I was past ten pages until I was on twenty-five.

I’ve been gone so long, I forgot how to end these things so, um, here’s a bat.

Book Breakdown (and a free something!)

I’m going to do it! I’m going to give something away on my blog! It’s a copy of Texas Gothic by Rosemary Clement-Moore. Why? Because you should read it.

And, filing this in the “easier to ask forgiveness” category, it will be signed.

Sound good? Okay, I think the best way for you to do this is either:

B.) Submit a comment and I’ll draw it out of a hat.

C.) Cast names on the floor and see which one my cat chooses.

Probably B. Let’s go with option B. My cat’s not a very nice person.

(let you get something for nothing)

Everybody has that normal one in the family. You know the one. She sort of holds everything together when your crazy aunt is off making potions and magic organic household products, shampoos, soaps, and hand sanitizers, and your genius sister is popping fuses every time she tries to test her latest invention.

She’s the responsible one. The one who answers the phone every time; the one with the normal future that doesn’t involve getting swept up in mystery; the one who does it because she loves you no matter how weird things get in the nuthouse.

That’s Amy Goodnight. She’s ranch-sitting for her aunt (and baby-sitting her brilliant but intellectually distracted sister). Until construction on a bridge unearths a body and a ghost won’t leave Amy alone. She struggles maintain her aura of normalcy in front of the neighbor cowboy, Ben *cat-growl* as well as the Anthropology crew that shows up to take care of the body.

Make that “bodies”. As the body count grows higher, Amy’s might be the next one to be buried if she can’t get the whole ghost thing under control.

There are goats climbing trees.

Leave a comment. How excited are you to get this book?

Why I Read YA

It seems every few weeks, someone says something misguided or general about the Young Adult section at the local library/bookstore. While I usually miss the inciting incident, I enjoy pouring myself a bowl of Rice Krispies and sliding into my front row seat on TweetDeck to watch the publishing industry retaliate.

Have I ever mentioned I love social media?

#YAShowdown was the more amusing hashtag, while #YASaves was more of an emotional outpouring, trumpeting the lessons and triumphs, the sights we saw, the scents we smelled, the roads we traveled when traversing some of our favorite stories considered: “Young Adult”.

It’s well-written. There’s a story. The characters are compelling. The styles are diverse. It wants to take risks in the good way.

Life isn’t candy-coated, sugar-sweet, let’s all go to the prom and be happy.

Life is hard. It sucks. We weren’t born with an instruction manual. People make mistakes. Reality is tough and it doesn’t wait for you to be an adult to start throwing curveballs.

Why wait in literature?

My mother read A Wrinkle in Time to my siblings and I at the dinner table when I was a youngling.

My favorite section in the library was that little corner with the crusty sign above that said “TEEN” with half the “N” scratched off. I go to the library now and see their WHOLE ROOM dedicated to young adult literature, and there’s a prickle in my eyes as I try to imagine what it would have been like to have that many books way back when.

I even love the covers.

So, that’s it. No great insights.

You either get YA or you don’t. Find something you like, nay, love, and tell everyone about it.

Because reading is awesome.

In preparation for Memorial Day Weekend, I went to that wondrous place where dreams come true.

I sort of got carried away. Twelve books later, I decided that maybe, perhaps, I could get rid of two.

(when you can’t choose what to read next)

Tera Lynn Childs takes us inside the head of Phoebe, a high school cross country runner. Everyone has a hobby, a thing that makes them lose track of time, space, and the universe moves in perfect harmonious glory. For Phoebe, that’s running.

We get it. We understand. We lose ourselves with her as feet crunch gravel, sand, and track.

Phoebe is uprooted from her hometown in California when her mother gets remarried to a Greek, headmaster of a prestigious private school on an island. On the boat trip over, she discovers that everyone attending the school is a descendant of a Greek god including her stepfather and evil stepsister.

Phoebe’s only hope is to get a B average and a spot on the cross country team in order to get a scholarship to USC and move back home. How do you compete with demigods?

Voice, voice, voice. Let me be honest: this wouldn’t have made it to my library stack without voice. In the first ten pages, we are dropped at the end of a race, a moment of euphoria, and the best place to understand what is happening in Phoebe’s head.

Not really a runner? Doesn’t matter. You get it.

First person, present tense (I’ve been reading a lot of those, lately), Phoebe is a normal teen. She gets flustered, tongue-tied, but can be stunningly insightful and confident.

There’s a hint of mystery, a twist, competition, hot guys (descendants of gods, right?), cliques based on the Greek gods.

No actual gods in the book, though, so if you’re hoping for a Zeus/Poseidon/Hades throwdown, perhaps look elsewhere.